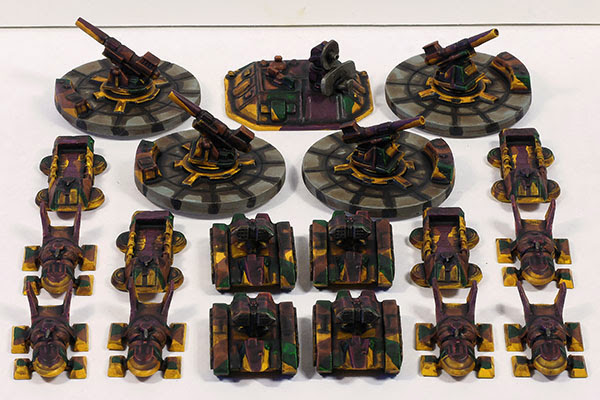 Last week I showed you all the basic colour scheme for my Ogreverse North American Combine force.  This week I've been suffering with the Red Dragon lurg, so called because the first person to have it came came from the RD lab at Imperial College.  So I've been feeling a bit under the weather and not sleeping well.

In spite of this I have managed to put three washes on my Combine miniatures, which is what I'm showing off today.  I've just started the next round of going back and highlighting the yellow, and hopefully I will get these finished by next weekend, even with Xmas being in the way.

These models are enough that I can now run a basic Mark 3 Ogre attack, if I had a Pan European Mark 3 Ogre, which I don't.  So much for that plan.  Still, if my parcel ever arrives from Warehouse 23 then I will be able to rectify this shortfall.  More importantly once these are done I will put the tray of Combine castings on my workbench and start cleaning them up and adding magnets for the turrets.  I'm also planning on building up that original Mark 4 I have too.  The excitement here is almost unbearable.  Soon I shall be able to roll my horde of Combine armour and infantry into Europe and sweep all away in front of me and here the lament of the women, or something like that.

Still it will be nice to be able to play Ogre/GEV games with miniatures on the new hex maps of the Designer Edition.  I'm also thinking about some mini-campaign rules to generate battles that auto-generate force choices and scenario victory conditions that goes outside of the Steve Jackson Games of making sure that the games are balanced, because sometime unbalanced games are more fun to play; as long as the victory conditions are satisfying and allow both players to feel that they have achieved something worthwhile.  More thoughts about this as and when I have them.