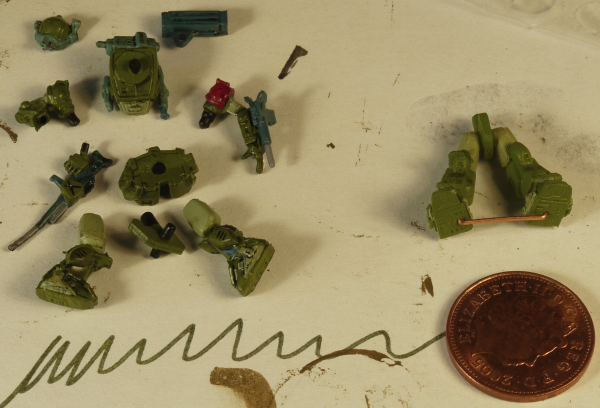 These are Takara F/144 micro scale VOTOMS. Oh these are even lovelier than the GZG Hound Dogs. I got quite a large haul of these recently, sixteen boxes of these beauties in fact. These are an inveterate modifier's dream, as they come in lots of tiny-teeny pieces, which saves cutting them up and all. I can see that this may not have been their best selling point when they were first released though. When was that? Back in 2006, which means that I was quite lucky to find these on eBay. The chances of getting more is slim in the short term. In the long term, things come to those who wait.

The models are in a soft plastic, like most gashapons in fact, and as a result they bend a bit. The trick is to put some wire into them, which stiffens them up considerably. Once glued together they then become remarkably rigid. So here is a  shot with two 10mm MechWarrior infantry, a  GZG Hound Dog, and a BattleTech Atlas for size comparison. 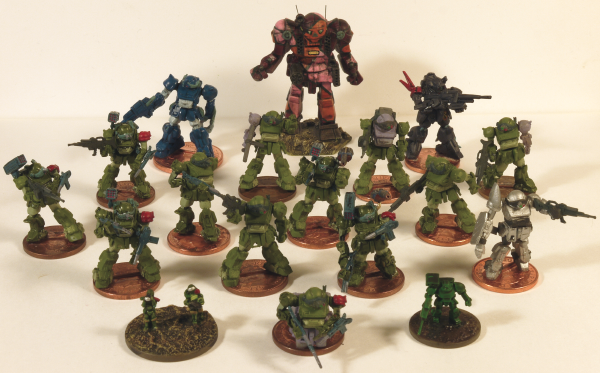 I want to go back and tweak some of the models a bit more. Adding at least one bazooka rocket launcher weapon to one of the Scopedogs. Then modifying a couple of the rifles into snub guns too, along with making variants versions of the missile launchers. I also have three more of the blue Rabidly Dog mechs to make, and one more Blood Sucker mech ( the one with the red antennae) to make up. I've also got one Tortoise and three Diving Beetles along with assorted vehicles and accessories to play with too.

However, these little mechs are just perfect for OHMU, and I've been inspired to peruse the old second edition files I have. OHMU was always written to be used with the miniatures that one could get hold of, as even back in the day, I didn't imagine ever marketing a range of specific OHMU miniatures. Not unsurprisingly, we got a lot of feedback saying that the game sucked because we hadn't market any miniatures for the game. Yes, we did draw up concept art, but that was for inspiration, and more of an aspirational thing for how the mecha of the world of OHMU looked.

Anyway, I've also had a rules writer's epiphany and a moment of clarity about how to re-write OHMU Warmachine that came fully formed into my head. I'm trying to fight the urge to get over excited, and too involved in a project that will suck away all my time for very little reward though.

OHMU Warmachine didn't sell well, got reviews that said it was a mediocre to poor game, and generally the project dragged me down into the pit of despair that led to me losing interest in my hobby. Oh, and here is a nice conceit for all you VOTOMS fans.