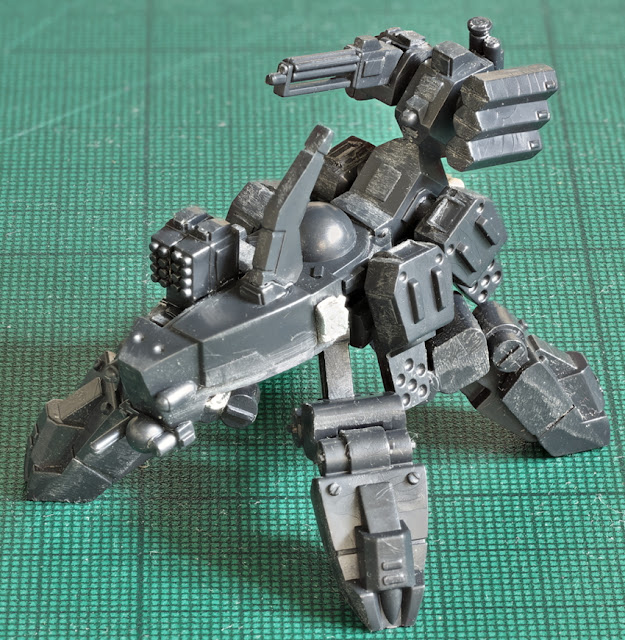 I like Dream Pod 9s Heavy Gear miniatures.  Small giant robot walking tanks, what's not to like?  However, as is my won't, the chance of me playing in their Terra Nova setting is minimal, not because it's not a great setting, I would go so far to say it's one of the best SF RPG setting books ever published, but because I like to do things my way.

Here's my Meggido-Kadesh-Bashan kitbash: perhaps I should call it a Mekabashan?  Perhaps not.  It is meant to be a command variant, hence all the extra gribbly bits, which I think makes it look interesting.

I'm using the Caprice walkers as a basis for my own near future setting as Russian Federation combat armours:  combat armours being sit and drive large power armour suits.  Clearly Russian combat armour is designed to deal with soft ground, from all the snow Russia gets.

The generic name for these in Russian is Pokhodnaya Boyevaya Platforma or PBP, my first conversion of a Caprice Ammon, which I called Object 295, can be see here.

I also made up a couple of Caprice Accos, so I could make my mind up which weapon I preferred?  Still not sure which one I like best.  Again I've added gribbly details bits, in particular the fuel tanks that are signature item on Russian tanks, which for me adds a Russian feel to the models. 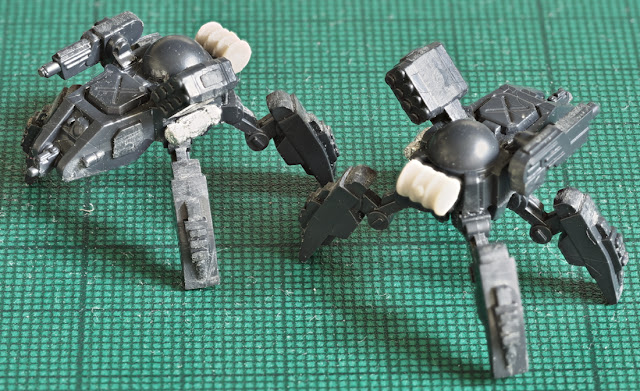 My observations on the plastics is that they're OK for what they are: cheap intro models.  The plastic is slightly shiny, and feels like it's some sort of engineering plastic i.e: designed to be slippery.  Some people have had difficulties gluing them with conventional plastic cement.  I use Butanone aka MEK, which welded the plastic together.  Also, I would have also preferred a lighter colour than the very dark grey because it would be easier to see the details when trimming the models off the sprue.

I'm also a bit fussy when it comes to mould parting lines and therefore spent a considerable time filing and fussing over the parts before assembly.  When I took these pictures, I could see that I hadn't paid enough attention to the finish and went over the models with a fibreglass pen to polish the surfaces up.  Also, in my opinion the sprue-gates on the mould did not take into consideration ease of cutting the models off the sprue e.g: on the Accos the sprue attaches to the nose of the legs, which means it is easy to lose detail when trimming the model unless great care is taken.

Still, way better than the Robotech models for ease of assembly.

As for differences between the injected moulded models and the resin originals, I only have the Ammon to compare.  This I can say is going to turn out differently, because the legs are from the Meggido, and do not feature the extra box-like structure on the upper leg that the Ammon has.  As such, it will sit lower and be less imposing.  I will make an Ammon up next and post pictures comparing the plastic to the resin and pewter model in due course.