For a change we weren't playing board-games with our plush toy kittens, who were left behind to sulk in the bedroom, as we went to visit our friends John and Rita on Saturday, and hang out with their friends.  This meant drinking Ginger Beer and snacking on finger foods, and chocolate cake for dessert.  All rather fabby.

The first game we played was Cthulhu Wars from Petersen Games written by Sandy Petersen, which is a board-game where the Great Old Ones vie for dominance over the Earth.

To say the game looks lush is a bit of an understatement as the miniatures are quite breathtaking, asking to be painted level of detail.  In fact John had bought a second set of figures to do this very thing himself.  The game plays well enough, but the map reminded me of Risk, but with different rules.  Most of those rules are very good, but I have a particular dislike for games where players are forced to make decisions on a countdown timer.  Call me an old fusspot if you like, but I'd prefer to roll dice against an attack than squabble with players over what is a fair allocation of points to be lost.

Apart from that minor quibble, which I would house rule, we had a fun game.  I lost, coming last, and Susan won, which was nice for her. 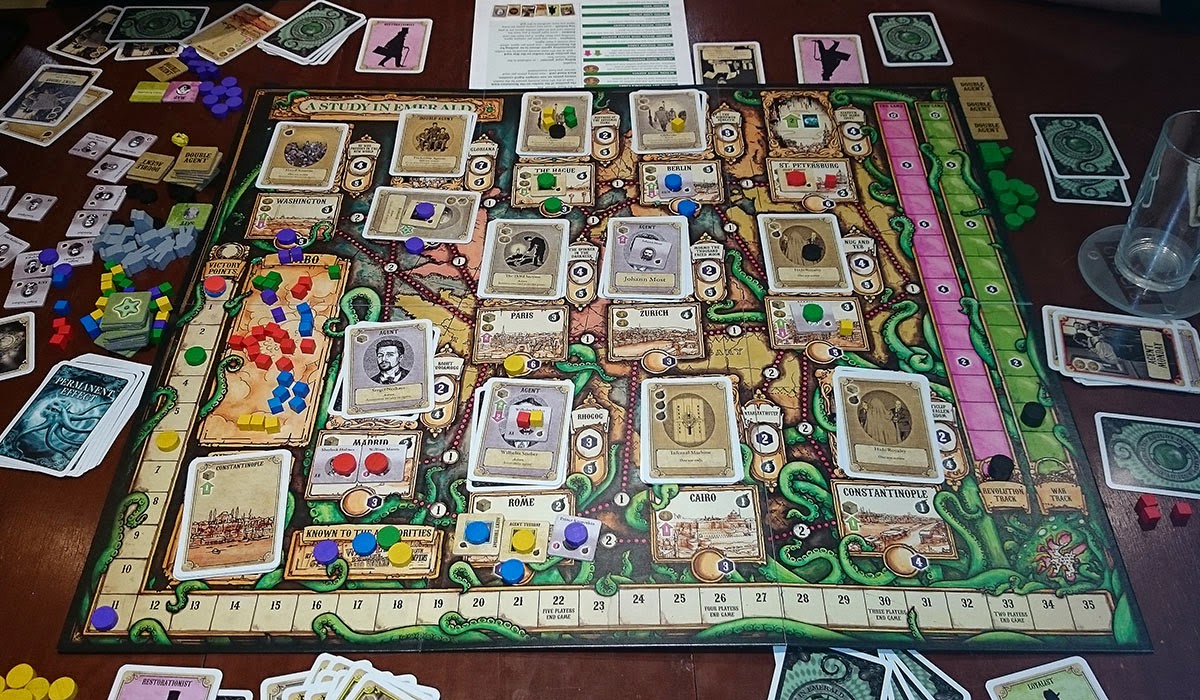 After finishing we played a quick card game, and then went onto to set-up A Study in Emerald from Treefrog Games, based off a short story by Neil Gaiman of the same name.  Joanna knew the rules for the game and explained them to us, and by the end of her explanations all of us were feeling like our heads were about to explode.  However, once play started and we got past the first round the play was very straightforward, with some nice nuances of play.  In the game one doesn't necessarily know who is on one's side, and this means decisions become more complex as a result.  I lost, but was on the winning side – the Restorationist's i.e: the humans who want to restore the world to the way it was before the Old Ones took over.