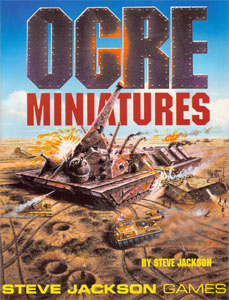 The Ogre Miniatures rule books stands as the central pillar for playing Ogre on wargame terrain.  It is both a testament to the popularity of the original game, and the levels that one can stretch a set of rules to convert them from being a hex map board game to one that can be played on a green tabletop.  I have a confession to make though, I have never played Ogre Miniatures on the wargame table.  Why, because I don't have a big enough table to play the game as written, and I also have certain reservations about the conversion.

The ground scale of Ogre Miniatures is two inches to 1500 metres, or approximately one mile if you prefer Imperial.  At that ratio the miniatures are at best tokens, and at worse things that are far too large, which get in the way of playing the game; in short gonks.  Also, because the original game is based on hexes that are units of area, the miniatures game conversion causes for me problems around measuring a straight line distance versus counting areas.  This is a problem one also encounters when playing BattleTech.  The two systems of counting distance are sufficiently different in their assumptions that for me they break the flow of the game.

If I lived in an ideal world where I had a house with a dedicated wargames room, and the financial resources to throw at my hobbies that meant I could do whatever I liked, then I would use Kallistra's Hexon range, which would meet my needs to have nice looking terrain, and no need to muck around with converting rules that changes the flavour of the game being played.  I also think that the Ogre miniatures line are the Redheaded stepchild of Steve Jackson Games.  I believe this because they don't fit within what SJG see as their core products, namely games using paper and card.  However, I also think that the miniatures played on the hex map boards are the epitome of the hybrid board wargame.


So here's hoping that Ogre Miniatures go from strength-to-strength now that the Ogre Designer Edition has reinvigorated interest in the line.