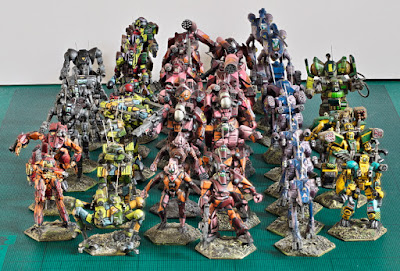 Quite recently Randall Bills blogged that 12 years ago that he had worked for a year on producing a set of tabletop miniatures rules for BattleTech quote:

"Not to mention I still have on my hard drive, 12 years later, the fully play-tested and developed BattleTech Omega rules set that utterly reshaped BattleTech into a pure tabletop miniatures game, tossing the entire current game system out the door.  A rules set a year in the making and at the end I spent almost a month of 12+ hour days finalizing…all that work and effort and it never saw the light of day."

No CGL employee wants to comment on Omega, other than to say Quick Strike is better and trust us, we are professionals.  Fair enough, but that rather leaves Omega open to idle gossip and speculation.

My own experience of writing a rule set is that one can easily spend a year working on a book, have something that plays well with the play testers, then take it to print only to find that one has produced a game that no one really wants to buy and play.

Rick Priestly, funnily enough, has written a piece in Wargames, Soldiers & Strategy this month on why there are so few second editions of rules?

I quite like WS&S, though I prefer Battlegames for my wargame magazine fix. However, I always browse WS&S, and buy it when a good article catches my eye.

However, I don't think that Mr Priestly is right, because I can think of lots of games that have gone into multiple editions.  BattleTech and Ogre just happening to be two of my favourites, and neither can be written off as garage/back of shed productions either.

Anyway, coming back to CGL and Omega, I interpret "trust us" means that they didn't think the rules would sell, and "good reasons" stands for "this wasn't the game we wanted."

I say this because I think that the thing that stood out for me was when Randall Bills said that the "rule set utterly reshaped BattleTech into a pure tabletop miniatures game...".

That rang several warning bells to me.

First off, while the BattleTech miniature rules that were printed in the past make a fair stab of converting the hex based wargame into a tabletop wargame, to me it is very clear that the writers backgrounds are in board-games.

The next thing that springs to mind is that when BattleTech was originally designed it was inspired by Japanese animation. I'm currently watching a fansub* of Fang of the Sun Dougram, and it is interesting to compare the game with one of the shows that were around at the time.

My partner and I find ourselves making comments while watching Fang of the Sun Dougram like, "oh look a death from above attack just like in BattleTech", or "oh look a head hit" etc., etc.. The story of Fang of the Sun Dougram has those elements that Jordan Weisman didn't like, namely the youngish cast of characters that typifies the Japanese obsession with youth, and the changing of society values.

So, my point here being that BattleTech was inspired by anime** and captures the essence of what made such shows attractive to audiences. If one forgets to touch base with what makes something attractive, one can easily forget the core values.

So what are the core values of BattleTech? In my opinion they are:

It is a game where you play the pilot of a giant walking combat machine.

It is a game where the heroes are game changers, even if defeated, or broken by events.

Hence from the start BattleTech has the feel of an RPG. It is a universe where armour is better than guns, because that was a way of keeping the heroes alive in the game. The whole weapons range thing that bugs so many people is again driven by the need to keep things up-close and personal.

Change these things and one is in peril of losing the things that makes the game appealing.

All of this serendipitously connects to what I've been writing about in three recent blog posts. The first on scale conundrums, followed by more about scale, and hexes versus terrain all discuss the various problems that come from trying to convert a hex based board-game into a tabletop miniatures wargame.

Nothing I'm writing is particularly novel, or even Earth shatteringly inspiring, but it remains something that is worth discussing all the same, because taking it all for granted just leaves us playing mindlessly.

Bottom line it all comes down to what is the game all about? What is the story being told?

The answers to these questions will determine ground and time scales, combat resolution, and how the game feels and plays. This is why I started my own BattleTech house rules called Epiphany, because it came from a light bulb moment "Keep It Simple".