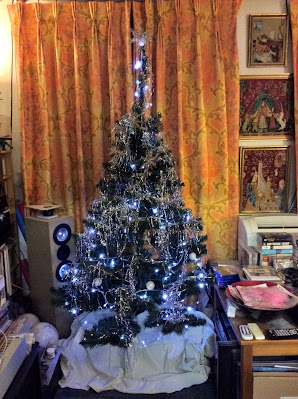 Merry Christmas to one and all.

Despite having written the Gate Walker trilogy, researched everything like crazy, I found myself doing more research.

Because I skimmed over details when writing the novels because they slowed down the story. Though it has to be said my Beta reader, Brian, did ask about how the Army combat armor differed from the Marines version?

Now Brian, and everyone else who wanted to know will have this information.

Here's a brief snippet to entertain over the Christmas holiday period.

CAS-3-Mod 1    Combat Armor System Dash (Mark) 3 Dash Model 1 is the Army's latest upgrade to their drive suit, which is supplied to Special Forces troops. It's slightly heavier than a CASE-2X because All Apes come fitted with mission packs that allow them to be outfitted with a large array of heavy weapon systems according the mission profile. See FM50-CAS-Mod and TO-2050-14-01-1U for further details.

CAS-3-Mod 2    Is the command variant of the Ape featuring an enhanced C4ISR pack: Communications; Computers; Intelligence; Surveillance; and Reconnaissance array of comms gear.

CAS-2-Mod 1    Is a scout combat armor suit for reconnaissance.

All the Army CAS-Mod variants have modular electronic packs that allows the combat armor to be optimized for specific mission tasks and carry one extra weapon from the following list: [snip]

CASE-2X    The Marine Corps Combat Armor System Environment Dash (Mark) 2 Extreme is driven by its operator, unlike its lighter counterpart MARPACE suit that is worn. It can operate up to three days before needing to be refueled. See FM51-CASES and TO-2051-16-02-1U for further details. Command variant  has enhanced C4 suite.

The Marine Mod-1 backpack integrates with combat armors Dispersed Operation and Guidance System, creating a parallel processing network of operating nodes that allows the operator to assign the AI/expert system interface the task priority of the systems. The Mod-1 pack allows a Dog to carry one extra weapon, the Mod-2 backpack carries two extra weapons from the following list: [snip]