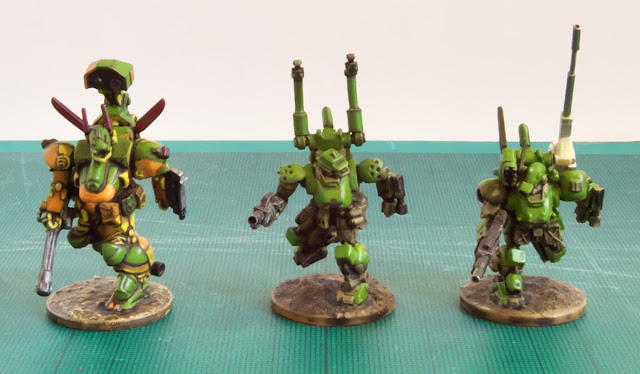 Here are three personality models, as in representing major character's combat armour suit rides. Ferretti's Buster fell and broke, which meant I had to repair the damage and repaint parts. The two Dogs are Corpsman Keith's new ride, which won't appear until I after I write Two Moons, as he needs it for the plot of Red Dogs.

As you can see I've also changed the over the shoulder mount on Tachikoma's Dog. Again this is down to what I'm plotting for Red Dogs, and yes I do think about this things way before I get around to writing the scenes.

As before I painting these as a group to try and finish them all at the same time. My reason being I will at some point need to pose them and take a reference shot for my artist when I ask him to do a cover for me.