The battle of Elizabethville was the second BattleTech game of the Mummerset campaign.


Trevor was again the commanding the OPFOR with me as GM for this second game of the day.

However, both the industrial mechs were played as notional mechs, as I hadn't remembered to print them out, but could remember roughly what their stats were (very roughly as I remembered the weapons wrong, and they were played as if one had an LRM5 and the other as an AC5, oops).


Clive was in nominally in command command of force Anvil, being the pilot of the Commando, while Susan piloted the Scorpion, and this time Dan controlled the four battle armour squads.

The battle armour was two squad each of five Grey Death Scouts, and five Grey Death heavy suits. Dan also had the use of the Northern Lights infantry security platoon, which was deployed before the dropship left to go back and pick up force Anvil from Cromwell.


Trevor's orders were again to not lose his mechs, and as this was his second game he had quickly cottoned on to the fact that while he had a lot of stuff that looked very impressive as it swept onto the the battlefield,  it was stuff that would in all likelihood die once engaged in combat.

Force Anvil moved to engage hostile forces that were heading towards the barracks of the the 3rd Royal Mummerset Guards where the dropship Northern Lights had landed them so that they could relieve Force Forge, which was under attack from rebel forces outside the palace at Elizabethville.  As they moved out from the camp they came under immediate fire from hostile forces.


The players had deployed the Scorpion in the center, which meant that it dominated the main thoroughfare and slowed down the enemy advance.

The Urban mech was the first mech destroyed, after the Scorpion's second round of fire had hit with devastating effect with the right arm being blown off after the right torso was completely vaporized, which resulted in the Urban mech pilot ejecting.

Then the Scorpion went on to punch holes in the Rifleman, which then failed its piloting roll and promptly fell over causing more damage to itself.
Unfortunately, for Susan, her Scorpion suffered a golden bb hit when Trevor rolled a double six on the critical hits tale after rolling a double one for the hit location. Fortunately, Susan's Scorpion only took two engine hits and one gyro hit from this event, otherwise her mech would have also been rendered hors de combat. 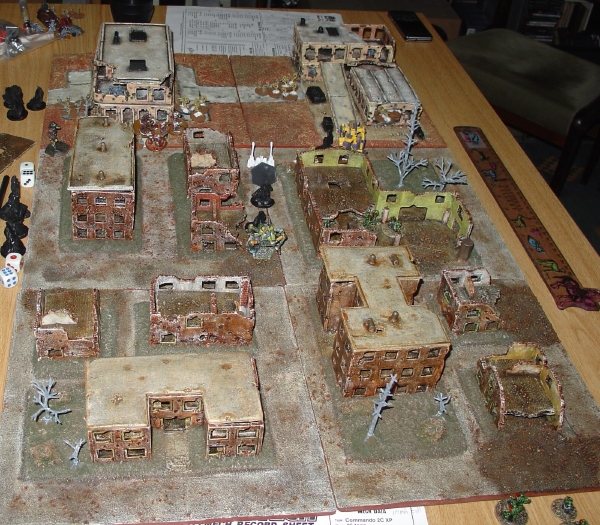 As can be seen from the above picture, placing the Scorpion on the central thoroughfare meant that Trevor's rebel force had to divide into two and come down both flanks. Well it didn't have to divide, but after the first round of fire hit the Urban mech to devastating effect, the rest of his forces strangely enough moved out of the Scorpion's line-of-sight.

With the Scorpion severely damaged the players didn't fancy pursuing the enemy who had started to withdraw at this point. The game was called, with me as GM again declaring a Steiner victory as the purpose of the battle was to send the enemy dropship packing and identify the existence of hostile mechs.
Seriously, this was a bloodbath with droves of rebel infantry being killed and downed mechs and the loss of the armoured car meaning that they would not to be able to effectively take control of the the 3rd Royal Guards barracks and armoury.


Clive was to say the least really unlucky with his die rolls throughout this game, which caused him a certain amount of frustration to say the least. So I decided to retcon his mech stats slightly, hence the italics.
I've changed out his Streak LRM launcher for a targeting computer as on the whole this will make hitting things generally easier. The in game rationale will be that when servicing his mech after the battle the technicians discovered that the computer programme controlling the mech had the wrong software for the actual hardware the mech was fitted with (though how no-one noticed this until now is another matter, I guess wrongly labeled parts?).

Just realised this is my 100th post. Permission to cheer loudly!