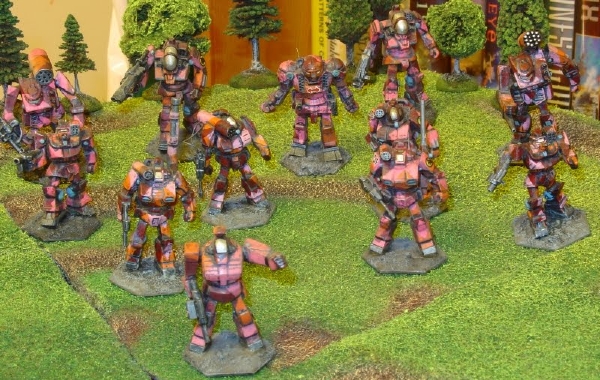 I've been reviewing my blogs, and I see that a couple of posts have no comments on them and I kind of wondered why? I reasoned that I said nothing that anyone felt was worth commenting on, which is fair enough.

Comments really inspire me to write more, so I thought about what to do? What I thought is that rather than just post pictures of my mechs, sans pretty much anything, I would add some comments and fluff, which will hopefully generate more comments.

My favourite BattleTech mechs come mostly from the anime show Fang of the Sun Dougram, known in Japan as Taiyō no Kiba Daguramu. This is one of three shows that FASA used the mechs from for their Battledroids game, which due to Lucas Films owning the word "droid" was renamed Battletech.

The other two shows were Crusher Joe, known as Kurasshā Jō where the Locust battlemech and Galleon light tank designs came from, and the series Super Dimensional Fortress Macross known in Japan as Chō Jikū Yōsai Makurosu, which actually translates as Super Spacetime Fortress Macross, which is of course the show that was the basis for the TV series Robotech by Harmony Gold.

My other favourite mechs being the Destroids that became know as the Rifleman, Archer, Warhammer and Longbow, plus the Valkyrie's that became the basis for the Wasp, Stinger, Phoenix Hawk and Crusader. Other designs were used, or based upon Macross designs, including the Marauder, along with the Ostall series, name from Crusher Joe; the image being an interpretation of the Zentradi battle pods. All of this being old news to OSR fans like myself.

However, for now let me talk you through the Pink Panther Battalion.

The picture at the top of the post is the first Company of the Pink Panther Battalion. It looks like a standard 12 mech lance, but in fact is organised into two 5 mech lances and a command element of 2 mechs.

The mech front and centre left in this photo is a custom modified Griffin that was turned into a representation of Fang of the Sun Dougram Bushman mech. Though it is a little too large in actual fact. However, I do have a couple of Gashapon Bushmen that I intend to use in my recon lances at some point. So this mech will be re-imagined as a Griffin command variant. 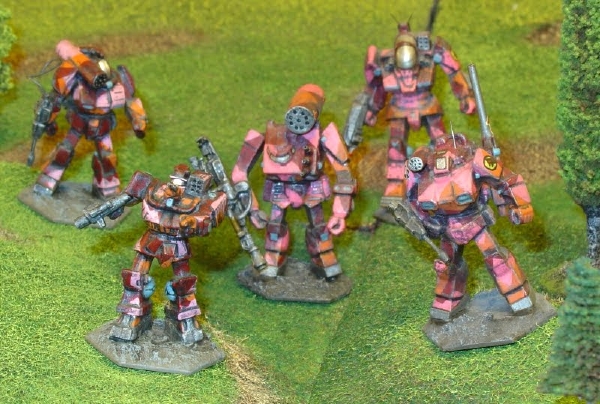 Here is my Alpha lance. It has all my favourites mechs in it from the show Fang of the Sun Dougram. The Battlemaster at the back of the pictures, which was known in the show as the Soltic HT-128 "Bigfoot".

This is an original "unseen" model with no particular modifications made to it, and was originally painted up in the late 80s, so it is 20 years old. I intend to refurbish the aerials at some point on all my old models, as at the time I used piano wire, but want to use finer guitar string, as it will look better. I also have a whole bunch of custom Pink Panther unit decals from Fighting Pirranha Graphics to add as well.

In the centre of the picture is my first Thunderbolt, which was known as the Hasty F4X "Ironfoot". This has been modified with a PPC on its right arm, and I've replaced the rather wimpy rocket launcher that came with the model with something more substantial, to make it look closer to the original design.

The Griffin, known as Soltic H8 "Roundfacer", is a newly modified model that has been turned into the 24th Battalion Custom"Korchima Special" from the show.

The Shadow Hawk, known as the "Dougram" that the show is named after, has only had a minor alteration to it, which was to make the over the shoulder cannon rotate on a bearing. Originally I just used a pin through the casting, but after 20 years this was showing signs of failure, so I rebuilt the joint using brass bearings.

Finally, the Wolverine, known as Abitate T-10C "Blockhead", is another newly made model that has been reposed, and it has had the main weapon replaced with a spare casting given to me by Glenn Wallbridge, a friend of mine who use to make model masters for casting for firms like Akhenaton Models. 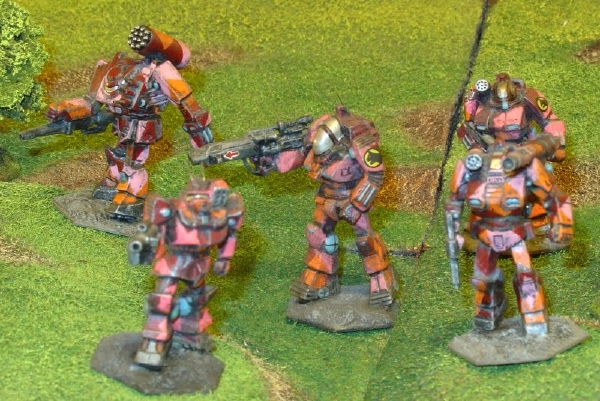 My Bravo lance is more of the same, because if one lance of Dougram mechs is good, two must be better.

In the centre is a customised Battlemaster, which has also been reposed. The Wolverine, Griffin and Shadow Hawk are all standard original "unseen" models. The Thunderbolt is a newly painted up and reposed "unseen" model that I finished last year. It keeps the original weapon, but I have again replaced the rocket launcher and done a lot of finessing to the pose of the model.

To me all the Dougram show mechs just look right. I have managed to acquire the main books on Fang of the Sun Dougram show, and I intend to post snippets of art from them in the future. It will be my tribute to this seminal "mecha" show that has not really been heard about, yet it was a big success in Japan, with model kits still being produced today, which is a real indicator of how influential it must have had at the time. 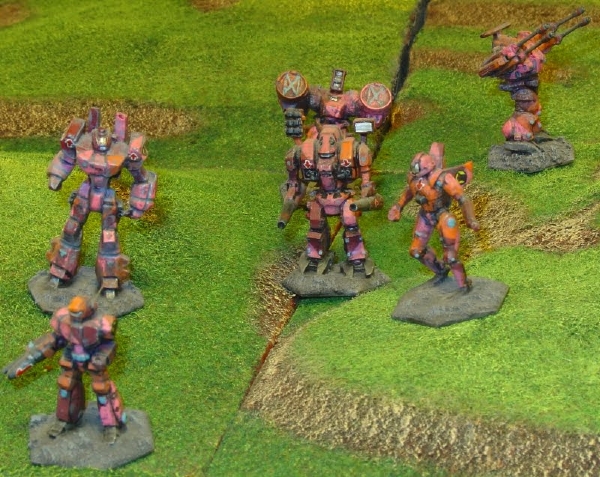 Finally, here are a few of the mechs I have in my second and third Company's.

With a total of 20 mechs painted up for my Pink Panthers, I'm not under any pressure to add more models at this time, so neither Company is complete.

On my workbench I have an Archer and Phoenix Hawk that are awaiting some love and attention, both of which are highly modified rebuild to correct deficiencies in the original design interpretation and casting. Unfortunately my time is limited, and in what time I have I've been mostly driven by the urge to get some opposition painted up, and this has taken up my spare time somewhat.

However, I actually have two each of the Warhammer, Rifleman, Spider and Wasp that you can see in the above picture. The second Company is based around Macross Destroid designs, with odd FASA in house designs that I quite like in the third Company.