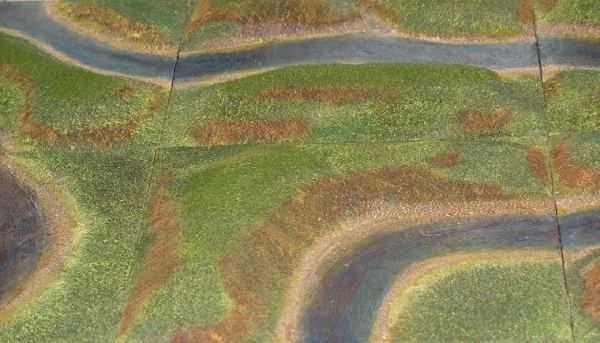 Well this weeks post offers me a respite from crunching numbers, because I have been busy working on making terrain boards to play games on. I have a thread over on one of the BattleTech boards.

This started of as a tutorial thread, which as metamorphosised into an experiential diary of my travails into making terrain.

The boards I first started on are now going through yet another upgrade from their original finish. Each time I try something new, it is a case of two steps forward and one back, but the terrain looks better each time. I don't think I'm yet at the stage that I'm producing terrain that looks real, though that would be nice, I'm not sure that it is achievable within the remit I've set myself, namely terrain to play games on.

Therefore, my boards are designed to be robust, yet light, and unfortunately that comes at a price.

Quite frankly you could do what I have done at less cost by going to one of the terrain making companies that advertise, for instance TSS.

I kid you not that I have spent several hundred pounds building my 45 terrain boards, some of which are still to be finished. And that is without adding a nominal cost for the hours that I have spent making, sculpting, and painting them.

I've even bought a static grass applicator off eBay, which is much cheaper than the Nock Gras Master. I call mine the Grassinator.

All the usual disclaimers here, I'm just a satisfied customer.

Of course, if you buy a bunch of terrain you won't have the hours of fun I've had doing what I call "adult finger painting". Also, as I said, my terrain boards are pretty tough, and can be walked on in stockinged feet. Boots might be a bit too much for them, but it would be a close call.

The same can not be said of most commercial terrain boards, with a few notable exceptions that use injection moulded parts, and even then I'm not sure they wouldn't crack under the weight? Anyway enough of the talk, here is a picture, enjoy.